The Third Sunday in Lent MMXI

WE beseech thee, Almighty God, look upon the hearty desires of thy humble servants, and stretch forth the right hand of thy Majesty, to be our defence against all our enemies; through Jesus Christ our Lord. Amen.

Source: Saramentary of Gregory, Bishop of Rome [600 AD] In the Gospel today Jesus heals a man possesed, stretching forth his hand 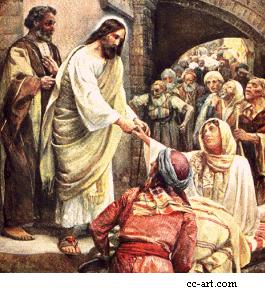 Blessed are they that hear the word of God, and keep it.

Chrysostom on the Epistle...

Ver. 3. "But fornication, and all uncleanness or covetousness, let it not even be named among you, as becometh saints."

He has spoken of the bitter passion, of wrath; he now comes to the lesser evil: for that lust is the lesser evil, hear how Moses also in the law says, first, "Thou shalt do no murder" (Ex. xx. 13.), which is the work of wrath, and then, "Thou shalt not commit adultery" (Ex. xx. 14.), which is of lust. For as "bitterness," and "clamor," and "all malice," and "railing," and the like, are the works of the passionate man, so likewise are "fornication, uncleanness, covetousness," those of the lustful; since avarice and sensuality spring from the same passion.

Ver. 4. "Nor filthiness, nor foolish talking, or jesting, which are not befitting; but rather giving of thanks."

Have no witticisms, no obscenities, either in word or in deed, and thou wilt quench the flame-"let them not even be named," saith he, "among you," that is, let them not anywhere even make their appearance. This he says also in writing to the Corinthians. "It is actually reported that there is fornication among you" (1 Cor. v. 1.); as much as to say, Be ye all pure. For words are the way to acts. Then, that he may not appear a forbidding kind of person and austere, and a destroyer of playfulness, he goes on to add the reason, by saying, "which are not befitting," which have nothing to do with us-"but rather giving of thanks." What good is there in uttering a witticism? thou only raisest a laugh. Tell me, will the shoemaker ever busy himself about anything which does not belong to or befit his trade? or will he purchase any tool of that kind? No, never. Because the things we do not need, are nothing to us.

Read the moral at the link as presented by Chrysostom

--
Released by Primus Pilus-Sabbtical
Legio Christi-Ecclesia Militans
"Let us therefore follow after the things which make for peace, and things wherewith one may edify another" [St. Paul's Epistle to the Romans 14:19]

Posted by Primus Pilus at 7:51 PM No comments:

The Second Sunday in Lent MMXI

ALMIGHTY God, who seest that we have no power of ourselves to help ourselves; Keep us both outwardly in our bodies, and inwardly in our souls; that we may be defended from all adversities which may happen to the body, and from all evil thoughts which may assault and hurt the soul; through Jesus Christ our Lord. Amen.

Source: Sacrementary of Gregory - Bishop of Rome. [600 AD] The petition is not only for assualts from without, but also from within. 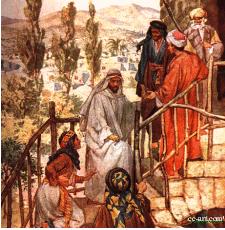 And her daughter was made whole from that very hour

The evangelist speaks against the woman, that he may show forth her marvellous act, and celebrate her praise the more. For when thou hearest of a Canaanitish woman, thou shouldest call to mind those wicked nations, who overset from their foundations the very laws of nature. And being reminded of these, consider also the power of Christ's advent. For they who were cast out, that they might not pervert any Jews, these appeared so much better disposed than the Jews, as even to come out of their coasts, and approach Christ; while those were driving Him away, even on His coming unto them. Having then come unto Him, she saith nothing else, but "Have mercy on me," and by her cry brings about them many spectators. For indeed it was a pitiful spectacle to see a woman crying aloud in so great affliction, and that woman a mother, and entreating for a daughter, and for a daughter in such evil case: she not even venturing to bring into the Master's sight her that was possessed, but leaving her to lie at home, and herself making the entreaty. And she tells her affliction only, and adds nothing more; neither doth she drag the physician to her house, like that nobleman, saying, "Come and lay thy hand upon her," and, "Come down ere my child die." But having described both her calamity, and the intensity of the disease, she pleads the Lord's mercy, and cries aloud; and she saith not, "Have mercy on my daughter," but, "Have mercy on me." For she indeed is insensible of her disease, but it is I that suffer her innumerable woes; my disease is with consciousness, my madness with perception of itself.

A mother's love, a mother's hope.

Read it all at the link.
Finis
--
Released by Primus Pilus-Sabbatical
Legio Christi-Ecclesia Militans
"Let us therefore follow after the things which make for peace, and things wherewith one may edify another" [St. Paul's Epistle to the Romans 14:19]

Posted by Primus Pilus at 5:56 PM No comments:

The First Sunday in Lent MMXI

O LORD, who for our sake didst fast forty days and forty nights; Give us grace to use such abstinence, that, our flesh being subdued to the Spirit we may ever obey thy godly motions in righteousness, and true holiness, to thy honour and glory, who livest and reignest with the Father and the Holy Ghost, one God, world without end. Amen.

This homily was traditionally said on Quardragesima... another name of this Sunday, which marked the start of Lent, as it was about forty days before easter.
Admonition and Exhortation for Communion 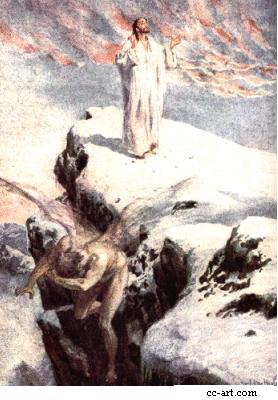 It is written, Man shall not live by bread alone,
but by every word that proceedeth out of the mouth of God

For the devil would not have assailed thee, unless he had seen thee brought to greater honor. Hence, for example, from the beginning, he attacked Adam, because he saw him in the enjoyment of great dignity. For this reason he arrayed himself against Job, because he saw him crowned and proclaimed by the God of all.

Read it all at the link.
--
Released by Primus Pilus
Legio Christi-Ecclesia Militans
"Let us therefore follow after the things which make for peace, and things wherewith one may edify another" [St. Paul's Epistle to the Romans 14:19]

Posted by Primus Pilus at 5:15 AM No comments:

the Sunday before Lent

O LORD which dost teach us that all our doings without charity are nothing worth; Send thy Holy Ghost, and pour into our hearts that most excellent gift of charity, the very bond of peace and of all virtues, without which whosoever liveth is counted dead before thee. Grant this for thine only Son Jesus Christ's sake. Amen.

Quinquagesima is about 50 days before Easter. Source, Bishop Thomas Cranmer [1549]. Reflects 1 Cor 13 on Charity. Replaced a Mideival prayer used on Shrove Tuesday, when penitients were shriven, that is absolved, of their sins

Thou son of David, have mercy on me 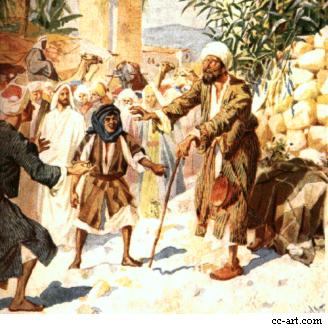 "let us keep to the things set before us, and let us listen to these blind men, who were better than many that see. For neither having a guide, nor being able to see Him when come near to them, nevertheless they strove to come unto Him, and began to cry with a loud voice, and when rebuked for speaking, they cried the more. For such is the nature of an enduring soul, by the very things that hinder, it is borne up."
Read it all at the link
Finis
Posted by Primus Pilus at 10:36 PM No comments: