Where are the "God-fearing" today? Has God changed so that there is no need any longer to fear him?

This past week I presented a medal of the Order of Centurions to my grandson Legionary Nathan. He was concerned and asked me about the motto on the medallion, "Fear God and do what is right"  [Acts 10:34 & 35].  He could not comprehend "fearing" God.  Well, I did explain it mainly in terms of awe and reverence but also of a holy fear of offending God through transgressions. Then throughout the week, I showed him Scripture to support this.
I wish I had read this article by The Rev. Dr. Peter Toon, but it was just published today. I commend it to you now so that should an occasion arise to explain the motto of the Order, you will be well equipped. I will place it in "Articles" on our links page.
TIME DEUM ET OPERARE IUSTITIAM
Mark

The Eleventh Sunday after Trinity

The Eleventh Sunday after Trinity

O GOD, who declarest thy almighty power chiefly in showing mercy and pity; Mercifully grant unto us such a measure of thy grace, that we may obtain thy gracious promises, and be made partakers of thy heavenly treasure; through Jesus Christ our Lord. Amen.

Source: Gelasius [492-496].   The Collect's emphasis on Grace, compliments the story of the Pharisee and the Publican praying in today's Gospel story from Luke. 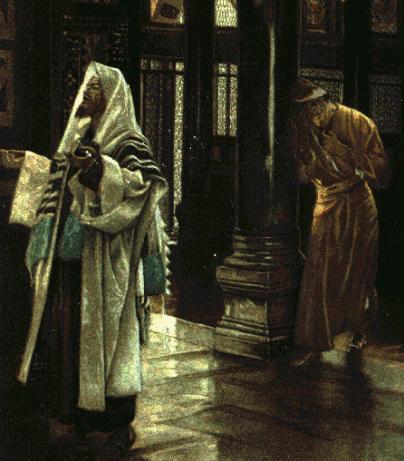 cc-art.com
Standing afar off, smote upon his breast
Feasts, Memorials, and Fasts
Julian, Centurion of Brioude (Auvergne), Martyr - August 28th
--
"Let us therefore follow after the things which make for peace, and things wherewith one may edify another" [St. Paul's Epistle to the Romans 14:19]

The Tenth Sunday after Trinity

LET thy merciful ears, O Lord, be open to the prayers of thy humble servants; and, that they may obtain their petitions, make them to ask such things as shall please thee; through Jesus Christ our Lord. Amen.

My house is the house of prayer 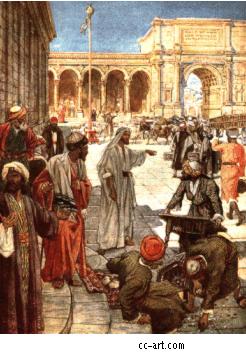 Announcements for the week beginning
20  August 06

Posted by Primus Pilus at 6:30 AM No comments:

Andrew, Tribune, Martyr and his Men

Almighty God, whose martyrs Andrew Startalas and his men, in their courageous contest for thee received as the prize the crowns of incorruption and life, Grant us thy strength, that we, like they, may cast down the tyrants and wholly destroy the demons' strengthless presumption. Through Jesus Christ our Lord, who with thee and the Holy Ghost, liveth and reigneth ever, One God, world without end. Amen

"Andrew was an officer, a tribune, in the Roman army during the reign of Emperor Maximian. He was a Syrian by birth and served in Syria. When the Persians menaced the Roman Empire with there military, Andrew was entrusted with the army to battle against the enemy. During this occasion, Andrew was promoted as a commander - Stratelates. Secretly a Christian, even though he was not baptized, Andrew trusted in the living God and, of the many soldiers, he chose only the best and entered into battle. He said to his soldiers before the battle that if they would call upon the help of the one, true God, Christ the Lord, their enemies will scatter as dust before them. Truly, all the soldiers filled with enthusiasm at Andrew and his faith invoked Christ for assistance and made an assault. The Persian army was utterly destroyed. When the victorious Andrew returned to Antioch some, who were envious, accused Andrew of being a Christian and the imperial deputy summoned him to court. Andrew openly confessed his unwavering faith in Christ. After bitter tortures, the deputy threw Andrew into prison and wrote to the emperor in Rome. Knowing Andrew's respect among the people and in the army, the emperor ordered the deputy to free Andrew to freedom and to seek another opportunity and another reason (not his faith) and then to kill him. Through God's revelation, Andrew learned of the emperor's command and, taking with him his faithful soldiers, 2593 in number, departed with them to Tarsus in Cilicia and there, all were baptized by Bishop Peter. Persecuted even there by the imperial authorities, Andrew with his detachment withdrew farther into the Armenian mountain Tavros. Here, in a ravine while they were at prayer, the Roman army caught up with them and all to the last one were beheaded. Not one of them even wanted to defend themselves but all were desirous of a martyr's death for Christ...."

ODE TO ANDREW AND HIS MEN

The nature's song in the midst of Mt. Tavros
Echoed without a loud human response.
Until one day, the mountain shook,
Some new echo, through her was carried;
And the mountain, its eternal echo halted
In order to hear the new, which it had not in ages, heard.
There, the end of the brave detachment of Andrew was,
There, the wolves, the innocent lambs slaughtered;
Andrew, from the Persians, the Empire of Rome saved,
And now, against Andrew, the Roman army roar,
With two-thousand companions, Andrew to the earth knelt,
To his companions, good advice he spoke:
Now is the pleasant hour, now is the day of salvation,
From the earthly life, our separation.
On our knees humbly before God, let us kneel,
And for much good, let us warmly give thanks,
And mostly brethren, for a martyr's death
Without anger and shouting against the murderous hand.
Thus, Andrew spoke. To their knees they fell,
Two-thousand men, began to pray;
Of the bitter pursuers, swords flashing
Atop the mountain, choirs of angels shone,
The doors of Paradise, in heaven opened
For Andrew holy, the glorious Stratelates
And his army, who evil overcame
And for their Christ, shed honorable blood.


Ancient Reading: The Passion of St. Andrew the General
--
"Let us therefore follow after the things which make for peace, and things wherewith one may edify another" [St. Paul's Epistle to the Romans 14:19]

The Ninth Sunday after Trinity

The Ninth Sunday after Trinity

GRANT to us, Lord, we beseech thee, the spirit to think and do always such things as are right; that we, who cannot do any thing that is good without thee, may by thee be enabled to live according to thy will; through Jesus Christ our Lord. Amen.

Source Leonine [440-461] taken in the Gelasian Sacramentary [492-496]. The 1662 Prayer Book revision added "who cannot do anything that is is good". One is reminded of Paul's Epistle to Phelimon vs 1:6 "That the communication of thy faith may become effectual by the acknowledging of every good thing which is in you in Christ Jesus." The Collect clearly points to God's grace and the work of the Holy Spirit in aiding us to do good. This theme was made a canon in the ecumenical councils and is part of the Order's vow. Today's Gospel story of the Prodigal Son reminds us of our innate nature and weakness and God's mercy and strength, as does the Epistle, that God will help us in the day of temptation.. 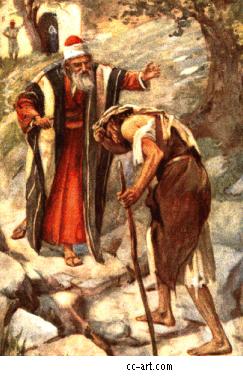 this thy brother was dead, and is alive again; and was lost, and is found
Announcements for the week beginning
13 August 06

News
The Order has received its 1-inch diameter pin Medals. These will be available for shipment on September 1st for a donation to the Order of $10 or more. Details are in the new Camp Store (Armorum Castrorum)

Kenneth of Tennessee in Officer Candidate School Training
Centurions in harms way
Peace in the Mideast
Posted by Primus Pilus at 12:15 AM No comments:

The Transfiguration of Christ

O GOD, who on the mount didst reveal to chosen witnesses thine only-begotten Son wonderfully transfigured, in raiment white and glistering; Mercifully grant that we, being delivered from the disquietude of this world, may be permitted to behold the King in his beauty, who with thee, O Father, and thee, O Holy Ghost, liveth and reigneth, one God, world without end. Amen. 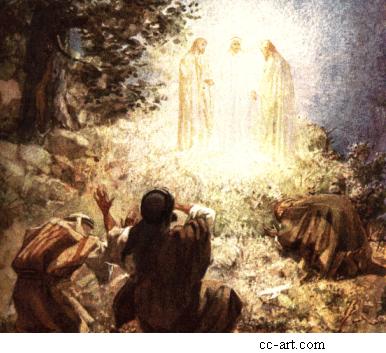 The fashion of his countenance was altered, and his raiment was white and glistering
Announcements for the week beginning
6 August 06

Posted by Primus Pilus at 11:50 PM No comments: 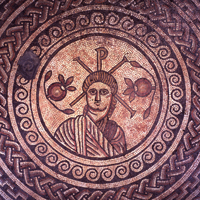 Constantine and the Chi Rho Mosaic
July 25th was the 1,700th anniversary of theproclaimation of Constantine as Emperor. This was an ecumenical religious service at midday led by the Archbishop of York at local Roman ruins followed with a parade exhibits.
See here  from the Times On-line.
http://www.timesonline.co.uk/article/0,,3933-2289978,00.html
and here from independent Catholic news:
http://www.indcatholicnews.com/york123.html
Centurions in England might like to visit the Yorkshire Museum where there is a display about old Eboracum, as the Roman Army Camp was called, before it became York. Good photos here.
http://www.helleniccomserve.com/constantinegreatyork.html
and here from an historical article of Elizabeth Hartley, the curator of the exhibition.
Against this background, it is interesting to consider the extent to which Constantine's proclamation in York might have affected the city. York, legionary fortress, colonia, and capital of Lower Britain for 100 years, had become the capital of one of four provinces which made up the Diocese of the Britains in 296. This province was most likely known as Flavia Caesariensis, and hence named after Constantine's father Flavius Constantius as Caesar. It therefore seems no accident that the larger-than-life-size marble head of Constantine should have been discovered in York in the area of the fortress near the headquarters building.

The hall of the headquarters building was rebuilt under Constantius or Constantine and a statue of Constantine is likely to have been placed there. There are also still standing the monumental remains of the corner-tower of the fortress with its connecting curtain wall, which fronted the river. The magnificence and sheer scale of this frontage when complete suggest that it was built with imperial backing, suitable for the high status of York and its position as a place where emperors resided and major events took place.