The Sunday next before Advent

STIR up, we beseech thee, O Lord, the wills of thy faithful people; that they, plenteously bringing forth the fruit of good works, may by thee be plenteously rewarded; through Jesus Christ our Lord. Amen.

Andrew.. saith unto him, There is a lad here 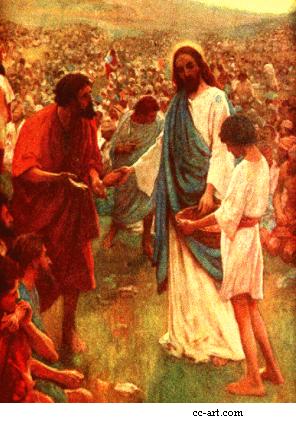 Posted by Primus Pilus at 7:49 PM No comments:

The Twenty-third Sunday after Trinity

O GOD, our refuge and strength, who art the author of all godliness; Be ready, we beseech thee, to hear the devout prayers of thy Church; and grant that those things which we ask faithfully we may obtain effectually; through Jesus Christ our Lord. Amen.

Source: Bishop Gregory of Rome [604 AD] Compare Psalm 46 God is our refuge and strength, a very present help [Barbee and Zahl]. The petition reminds one of Jesus' promise, 21:22 And all things, whatsoever ye shall ask in prayer, believing, ye shall receive. 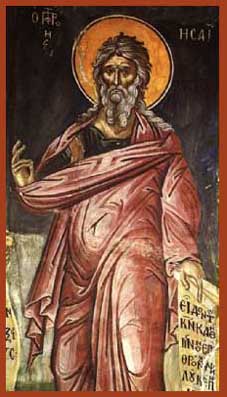 We all do fade as a leaf; and our iniquities, like the wind, have taken us away.
Posted by Primus Pilus at 10:09 PM No comments:

The Twenty-second Sunday after Trinity

The Twenty-second Sunday after Trinity
John Chrysostom on Philipians i. 1

LORD, we beseech thee to keep thy household the Church in continual godliness; that through thy protection it may be free from all adversities, and devoutly given to serve thee in good works, to the glory of thy Name; through Jesus Christ our Lord. Amen.

He which hath begun a good work in you will perform it until the day of Jesus Christ: 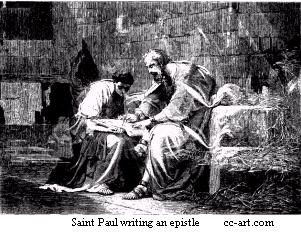 Announcements for the week beginning
12 November 06
News:
* We have added a line to the bidding prayers in both the daily devotion and the Eucharist to remember those who have gone before us. This was custom in the early church, and is found in early liturgies. We have offered prayers of thanksgiving for the saints in the Chapel and also on the Prayer page to praise God and petition him for grace to follow the good examples of all the saints.

Posted by Primus Pilus at 8:54 PM No comments:

The Poppies of Flanders Fields

ALMIGHTY God, our heavenly Father, in whose hands are the living and the dead; We give thee thanks for all those thy servants who have laid down their lives in the service of our country. Grant to them thy mercy and the light of thy presence, that the good work which thou hast begun in them may be perfected; through Jesus Christ thy Son our Lord. Amen [1928 BCP]

At the 11th hour, on the 11th day, in the 11th month, on a train in France, the Armistice was signed to end the Great War. Many hoped, and prayed, that it would be the "War To End All Wars."

In 1953, in a small town in Kansas, the people decided to remember not only the veterans of the Great War, but all veterans in times of peace and war: and so it has become an annual remembrance of Veteran's Day in the United States.

We commend the Service of Prayer for Veteran's - Armistice Day, and also for use the following Sunday in public worship. Let us in particular this day, remember our veteran centurions, and especially those who are now in harms way.

The poppie flower has come to symbolize this memorial in the US, France and the Commonwealth nations, from the war-time poem of a Christian soldier, physician, and teacher, Lt. Colonel John McCrae who fell due to pneumonia during the Great War. We remember Colonel McCrae today, and all those gallant men who fell in the Great War and in the succeeding wars. I commend this site for a biography of his life and career.

In Flanders fields the poppies blow
Between the crosses, row on row,
That mark our place; and in the sky
The larks, still bravely singing, fly
Scarce heard amid the guns below.
We are the Dead. Short days ago
We lived, felt dawn, saw sunset glow,
Loved, and were loved, and now we lie
In Flanders fields.
Take up our quarrel with the foe:
To you from failing hands we throw
The torch; be yours to hold it high.
If ye break faith with us who die
We shall not sleep, though poppies grow
In Flanders fields. 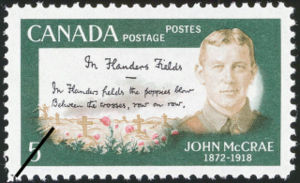 Lt. Col John McCrae, Canadian Expeditionary Forces
He felt he should have made greater sacrifices, and insisted on living in a tent through the year, like his comrades at the front, rather than in the officers' huts. When this affected his health in mid-winter he had to be ordered into warmer surroundings. To many he gave the impression that he felt he should still be with his old artillery brigade. After the battle of Ypres he was never again the optimistic man with the infectious smile. (Prescott. In Flanders Fields: The Story of John McCrae, p. 110).

McCrae contracted pneumonia and meningitis and died on 28 Janauary and "... was buried with full military honors in Wimereux Cemetery, just north of Boulogne, not far from the fields of Flanders. Bonfire [his horse] led the procession, McCrae's riding boots reversed in the stirrups. His death was met with great grief among his friends and contemporaries."

Amazons with the Legions

" On the fact of it, the evidence is quite convincing that these women served as members of the Roman cavalry, and they may very well have been Amazons. "
From another articles on the female cavalry centurions in the funeral pyre in England comes this.
Another recent excavation may provide additional evidence for their [Amazons] existence. At a burial mound at Pokrovka in Russia, archaeologists unearthed the 2,500-year-old remains of women dressed in full battle regalia. Weapons rested alongside their bones. One female skeleton had permanently bowed legs, which researchers believe suggests that she spent much of her life on horseback. Another woman found at the site, who may have died in battle, was found with an arrowhead lodged in her chest.
For now, it remains unclear how the Roman warriors found at Cumbria met their final end before they were cremated.
read the entire article from Discovery News a few years ago.. I have linked this article it to our Membership page site inviting women into the Order.
http://dsc.discovery.com/news/briefs/20041227/amazon.html
Posted by Primus Pilus at 4:22 PM No comments:

Grant, we beseech thee merciful Lord, to thy faithful people pardon and peace, that they may be cleansed from all their sins, and serve thee with a quiet mind; through Jesus Christ our Lord. Amen.

Stand therefore, having your loins girt about with truth, and having on the breastplate of righteousness 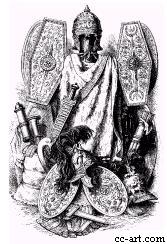 Announcements for the week beginning
5 November 06

News:
* There is a Service of Prayer for combatants in Iraq, with a link on our Order's Prayer page, sent to us by a centurion and assembled and or composed by a by a friend; we suggest it for use on Remembrance/Veterans Day November 11th and the Sunday following in public worship. One tradition is to remember our combatants on the 11th hour, the 11th day, of the 11th month when the treaty was signed ending the Great War in 1918. You'll note it on the calendar above along with the commemoration of four of Christ's soldiers. It may be easily modified for other nationalities, and used with the poem Flanders Fields. We suggest prayers for peace according to God's will, and for victory of Right over Evil as well. The appointed epistle for this Sunday from Ephesians vi. puts us in mind that we all need to don the armor of God as members of his great Army engaged in an invisible war against Evil.
* We've modified the front page slightly, moving some of the links and adding a few.
* Lt. Col John McCrae and the Remembrance/Veterans Day page is new.
* We've added several old tried and true prayers to the prayer page. The Lamb of God is the ancient version.. that centurions would have heard in the 4th Century. Also there is a prayer for the nation by Constantine... I am put in mind of the US motto: In God We Trust... so did Constantine. The prayer by Augustine for Night is from the Covenant Seminary Church History Course available through our Seminary page.. a similar translation of this prayer is part of the Episcopal Church evening prayer liturgy.

Centurions in harms way
Peace in the Mideast

IN HOC SIGNO VINCES - TIME DEUM ET OPERARE IUSTITIAM
www.OrderofCenturions.org
--
"Let us therefore follow after the things which make for peace, and things wherewith one may edify another" [St. Paul's Epistle to the Romans 14:19]

The Chi Rho Vision... in the clouds?

With His Head in the Clouds
http://www.delta-sky.com/2006_08/StarPages/index.html
I commend this article...with a reprint from a book by Gavin Pretor-Pinney, the Cloudspotter's Guide. He maintains the xP in the sky that Constantine saw was a naturally occurring phenomena. He could be right: Constantine may have seen the cross in the sky due to atmospheric conditions.
If so, does that make the legend of the Labarum all a farce? Well, not in my book. I believe God manifests himself using nature in ways that suit him, and I believe also of the vision that night, the voice, and the writing in the sky.  What this article does present, that refutes many naysayers, is that the sign could have indeed been seen by his entire Army that day as Eusebius says Constantine swore to him. A quote from the article...

A rare coin—the 'Spes public'— struck in Constantinople in AD327, shows a particularly clear depiction of the military standard that became the established one for the Roman army, following the vision accorded to Constantine and his troops fifteen years before. It shows the labarum above a banner with three circles on it.

When the sun happens to be at an elevation of 22° from the horizon, the smile of the circumzenithal arc can appear to touch the 46° halo. Were the cloud cover broken, so that just a part of the halo appeared below the arc, the effect is not a million miles away from the cross in Constantine's labarum. And the vertical line of the 'P', incorporated into the symbol? It is a sun pillar appearing below the sun, of course. Three coins on the vellum below the symbol? Well, it goes without saying that they represent the sun with sundogs, or mock suns, on either side of it.

Comment: Eusebius said the royal cloth had the medallions of Constantine and his sons, but perhaps it came to him to so display them from a vision of "suns" as described above
You can read Eusebius and others at these links.

And let us remember that Constantine, moving on this vision, soundly defeated a force much larger than his own. His opponent made a critical tactical blunder on the advice of pagan priests in coming out of the fortifications of Rome, crossing the Tiber with it at his back and with no room to maneuver or to withdraw. Nor must ever forget the civil results: an end to persecution of Christians... the restoration of Christian property, and freedom of  Christian worship wherever Constantine ruled, the council that consolidated the catholic-ortodox faith and discredited the heretics.

Finis
--
"Let us therefore follow after the things which make for peace, and things wherewith one may edify another" [St. Paul's Epistle to the Romans 14:19]