The Fourth Sunday after Easter

O ALMIGHTY God, who alone canst order the unruly wills and affections of sinful men; Grant unto thy people, that they may love the thing which thou commandest, and desire that which thou dost promise; that so, among the sundry and manifold changes of the world, our hearts may surely there be fixed, where true joys are to be found; through Jesus Christ our Lord. Amen.
Ezekiel xxxix. 21, Psalm 147, St. James i. 17. St. John xvi. 5.

He will guide you into all truth 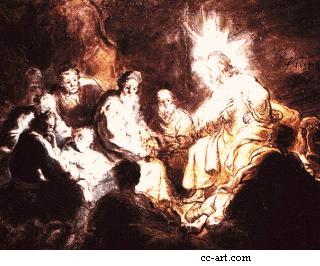 In the Gospel appointed for this fourth Sunday after Easter, Jesus told his disciples that he would go to his Father, but that it was necessary for him to do so in order that the Comforter, the Holy Spirit, could come to them. Jesus calls him the Spirit of Truth, and told the disciples that the Spirit would guide them into all truth. This promise is really the foundation for the living Church. God is with us, and our assurance is that he will guide us into all truth.

What a wonderful promise this was. The disciples, feeling sorrow that Jesus was to leave, are told a mystery. God's spirit would dwell with them in the place of Jesus, and would tell them of all the things that Jesus did not have the time to tell them. On the Day of Pentecost God sent his Holy Spirit upon the apostles to be present with them specifically, and upon all members of the new Church. The Spirit taught them many new things and led the Church in its formation and practice.

The Early Church embraced this promise and witnessed the power of the Holy Spirit through gifts, miracles, and signs. They also recognized something else: Sometimes there were disagreements in "truths". Some came with their belief that Jesus was the Son of God and divine, others that he was just a regular man. Some discerned a Triune nature of God. Some that Jesus, the Spirit, and the Father were co-equal and of the same substance. Some believed that they had freedom to live in any way they chose, regardless of what the old law had said. With so many claiming that they had a new revelation that was a "truth" inspired by the Holy Spirit, the church fathers sought ways to discern the truth.

One of the early movements of the Holy Spirit was to open the Church to Gentiles. We know of this truth being revealed to Peter when he was given a vision and went to Cornelius the Centurion, and then reported this truth to his brothers in a Church council [Acts 10 & 11]. Later Paul was moved to rebuke those Christians who taught that Gentiles must undergo circumcision and other rituals of the Jews. He brought this matter to a Church council who discerned by discussions amongst themselves what the Spirit had revealed. Later in the First Ecumenical Council the Church addressed the nature of Jesus, and denied the teachings of a large group of Christians who taught that Jesus had been created by the Father. Their discernment of the truth led to the Nicene Creed that most Christians affirm.

Today the Church is divided. The last truly ecumenical council was in the Eighth Century. Since then the Church has had many different elements claiming they were led by the Spirit in a different way. It is difficult for me to imagine there are many truths, but we continue in this pattern. It is often difficult to know who is right. We know that some changes are not addressed by Scripture and represent one way of many of worshipping or organizing. However, other innovations are contradictory to both Scripture and tradition - and are rejected out-of-hand by most Christians. The words of our collect seem so appropriate to these movements for today: among the many diverse and manifold changes of the world, may our hearts be fixed on our Lord. May we look to the example of those of Berea, who searched the Scripture diligently to see if those things taught by were to be found. Let us also consider the Wisdom of tradition, the Holy Spirit working in the Church, as we consider truth and error. Even though the Church is divided, may the many different factions of the Church Militant stand together in strength against innovations that threatened our core beliefs, and may God lead us as Christian brothers in all truth.