The Third Sunday after Easter

ALMIGHTY God, who showest to them that are in error the light of thy truth, to the intent that they may return into the way of righteousness; Grant unto all those who are admitted into the fellowship of Christ's Religion, that they may avoid those things that are contrary to their profession, and follow all such things as are agreeable to the same; through our Lord Jesus Christ. Amen.

the LORD is a God of knowledge, and by him actions are weighed
[1 Sam ii] 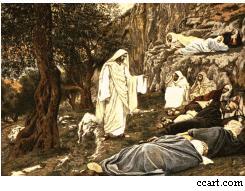 Pope John II was buried this week, and there was an outpouring across the world of praise and admiration for the leadership he had provided to the Roman Catholic Church and his example in the Christian world. Four-million people gathered in Rome at John Paul's funeral. John Paul II's reign as head of the Roman Church will be remembered in history as remarkable. Why was this? Each will remember him for different things; for me it was because he was strong in the faith and did not let pressures of a humanistic and secular world-vision rule his words and actions. He looked to God, the Scriptures, and tradition for his guidance and through love conveyed the ancient truths to his generation in a way that helped to strengthen the entire Church Militant and free millions of Europeans from the tyranny of atheistic Communist rule. The world weighed his actions by God's word, and found him to be a faithful servant of his Master and true minister to his flock. The words of the prophet Samuel from our Old Testament reading echo in our ears this day, the LORD is a God of knowledge, and by him actions are weighed

Ironically, this week in the Anglican Communion we see quite a different picture, but one that is based on the same principle of weighing actions against the Word of the Lord. This week the Episcopal Church of the USA (ECUSA) withdrew its representatives from the Anglican Consultative Council at the request of the primates of the Anglican Communion. Why? It was because the ECUSA had consecrated a practicing homosexual to the episcopacy, and had authorized serivces of the blessing of same-sex unions. The primates found that these actions not only were contrary to the clear word of Scripture, they violated a specific pronouncement of the primates meeting at Lambeth in 1998 that homosexual lifestyles were incompatible with Scripture. As late as 2002, the Presiding Bishop of the ECUSA had assured his fellow primates that the ECUSA would respect this strongly-held precept of the Communion. The actions of the ECUSA broke trust in the Communion. The primates, perhaps considering the words of Samuel, weighed the actions of the ECUSA against the Word of the Lord and found it to be wanting. So much so that many refused to take communion with the Presiding Bishop of the ECUSA when the primates met in Ireland in February 2004. They have in effect excommunicated those Anglicans who were involved in these innovations. The primates further asked that bishops, who participated in or voted for the consecration, relieve themselves from Anglican Communion meetings. Finally, they asked the ECUSA to place a moratorium on same-sex blessings and consecrations of homosexual bishops, withdraw its voting members from the Anglican Consultative Council, and to present before that council a Scriptural justification for their actions. These are not mere requests; failure by the ECUSA to respond positively could result in a formal expulsion from the Anglican Communion.

These seemingly disparate events this week are linked at the deepest level by the simple but profound precept of orthodox Christianity -- the relevancy, truth, and authority of Scripture. The world weighed John Paul's leadership and actions and found a man who endeavored to live the Gospel and measured his own leadership against the Word of God and traditions of the Church. The world assessed the ECUSA and found it had violated trust among the brethren and ignored the Word of the Lord.

The words of today's collect are as appropriate for our times as they were when recorded in the Prayer Book in the 16th century. A fellow centurion this week reminded me that we have a duty to do; we should pray that God show those who are in error the light of his truth, with the intent that they may return to righteousness. May he help us, and all Christians, to avoid those things that are contrary to the profession of our common faith; and finally, may we follow the leading of his Holy Spirit and Word in all such things as are agreeable to Christianity. It is my hope that centurions will pray this collect throughout the week, being mindful of recent events and our need for God's Grace Amen